This page is still in rough
and is presently being worked on!

"Unto Adam also and to his wife did the LORD God
make coats of skins, and clothed them."

Also alluded to in the Atbash bible code is this prophecy from Rev. 19:7-8.

"Let us be glad and rejoice, and give honour to him: for the marriage of the Lamb is come, and his wife hath made herself ready. And to her was granted that she should be arrayed in fine linen, clean and white: for the fine linen is the righteousness of saints. 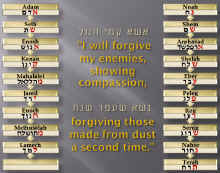 I will forgive my enemies, having compassion, forgiving what is dust a second time.

(Sub acrostic: "I will choose them with joy!")

I will arise! I will be raised up!

To whom will he show compassion?

Upon the Risen One will I look with favor, upon the dust of a poor man a second time!

The following is the Atbash of the above. It is read all the way to "Judah" in the genealogy:

"The ark of my freedom is like the great kindness shown to the couple.

This is an utterance by their flawless one!"

(Or may read, The perfect utterance of a "Mem"!)

O' daughter, my pardon is like the kind deeds done for the couple.

The following is also the Atbash of the original acrostic, except here it is read in a zigzag motion all the way back to "Terah" in the genealogy. (Terah was the father of Abraham.)

(In the next reading, the name "Adam" is removed.)

Blood came forth from one writhing in pain!

The one prophesying with a skin shall uphold (you) - a Son!

The one prophesying with a skin shall "Sa'mek" - a Son!
("Sa'mek" is the 15th letter of the Hebrew Alphabet, whose Atbash is a "Chet", the letter used to spell Eve.)

Only the First 9 Letters

The first nine letters from the list of names beginning from Adam expands to form an image of Noah's Flood and a pillar of fire. It has 77 lines of code and about 600 letters --- all expanded from just the original nine letters! 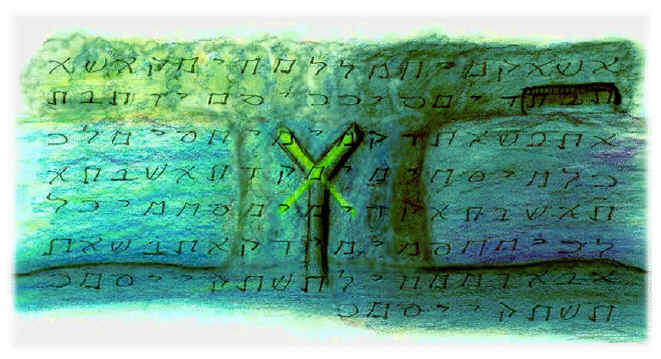 The acrostic of the names acrostic:

I will choose them, rejoicing!

Your white linen is upon the daughter!

You will be crushed because of a "bat" ("daughter"),

(the letter) Sheen because of a "

(the letter) Sheen with/against/because of a "

(Note: the second and fourth sentences are the same acrostic, but the Hebrew can read both ways. The Atbash of the Hebrew letter "Bet" is "Sheen".

Let us do some conjecturing...

This may imply that of the 22 letters of the Hebrew alphabet, all the odd numbered letters, [the first, third, fifth, etc.,] perhaps represent the male gender whereas the even numbers depict the female gender? Thus, each Atbash has its opposite like Adam has Eve. This is also suggested by the fact that the first letter "Aleph", thus being male, agrees with the fact that here in the names code acrostic this first letter from whence the letter "Aleph" was taken comes from the name Adam, meaning "man", the first name in the genealogical list. Thus, the "man" begins the string of Atbash letters beginning, and out of "man" comes his opposite and companion, a "woman" "Tav", but from his daughter ("Bat" equals letter "Bet") also comes a man, that is Christ in the flesh. This suggests that Alpha depicts Christ before made flesh whereas Sheen depicts Christ after he was made man. If true, this is interesting also because the very word "Atbash" would thus be a description of Jesus Christ as fully God and fully Adam/man! (The word "Atbash" simply comes from the first two letters of the Alphabet and their Atbash, the last two letters of the Hebrew Alphabet.) Thus, when male and female are both called "Man" {i.e., mankind}, and together are said to have been made in the image of God (as well as just Adam), we have before us a wonderful mystery about Jesus as the Son of God, Son of Man, and Husband of the Church, His bride. It is also interesting that it happens that the first letter in the name "Adam" is an odd number and thus would appropriately depict the male letter "Aleph", whereas the letter used to spell "Eve" is the 8th letter of the Hebrew alphabet, a "Chet", which would thus be female letter being an even number.

Moreover, both the numbers one and eight (used to spell Adam and Eve) can represent in bible numeric, "A new creation", of which Adam and Eve most assuredly were!

The male and female letters are both opposite and yet one. The fact that in modern days "Sen" and "Sheen" are  sometimes counted as two distinct letters may also suggest that Tav [Omega] is really neither male nor female when describing God, for God is a spirit.)

He finished them! He will sweep the seas away! When I bow my head (then) I will rest! Alpha!

Omega! I will rest! I will bow the head! He swept the seas away! It is finished!

He finished them! He will sweep the seas away! When I bow my head (then) I will rest! Alpha!

He finished them! He will tear the days apart!  When I bow my head (then) I will rest! Alpha!

Come O day/sea of mercy! A "Mem" will be crushed until small, a letter with majesty!

(Or, "The Atbash of a letter was crushed until small! O' waters/Mem's of mercy, He shall reign!)

Come O day/sea of mercy! A "Mem" will be crushed until small, which is the Atbash of a letter!

At Babel ("The gateway to Heaven") the languages were Atbashed/confused! 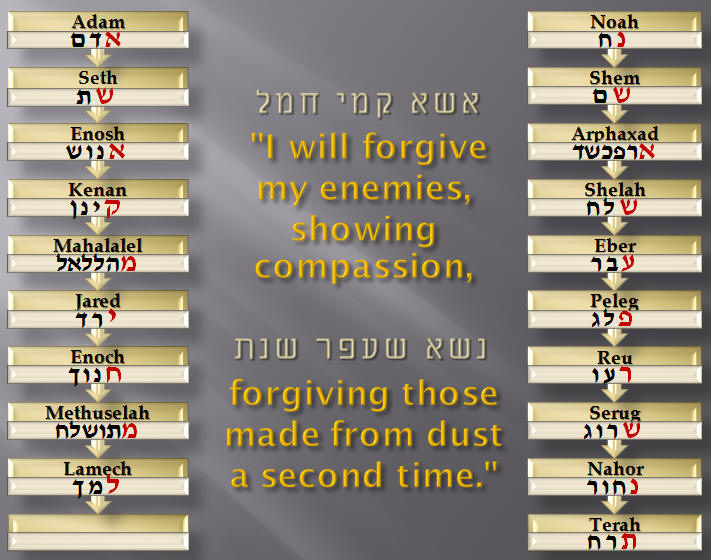