(Or, Click here for the most up-to-date version of this page!)

A Cherub Weighs
the House of Israel
in the Balances 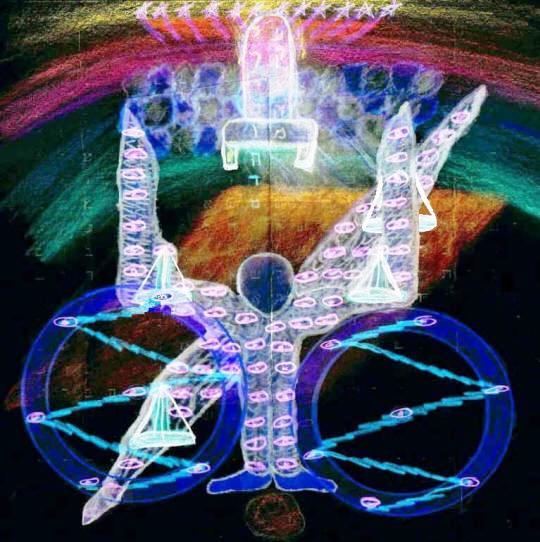 God confirmed that original code in many ways.

The above was the first image to be revealed from Isa. 46:1-6. It is an overlapping-image of a tree, a tilted lamp, a tilted balance, and a river running through the whole image. See "The Balance Bible Code" for what each part of the image reads in Hebrew.

The Flames of the Lamp

Of late it has been discovered that overlapping the above lamp and balance is also a cherub with four wings. Interestingly, in the book of Ezekiel, the cherub there is described as "shining like a lamp with its fire moving up and down it" --- just as in the picture bible code. In the book of Ezekiel it also says that the appearance of the cherubim were like "burning coals of fire", which is symbolic of judgment in the bible in the same way that the balances are in the bible code.

The Eyes of the Lamp

In the below image, note where the seven lights of the lamp overlap on the cherub. Note that the middle (strong) flame of the seven lamps overlaps the right (strong) eye of the cherub. It is perfectly positioned.

(In the bible, eyes are often associated with the flames of a lamp, Zech. 4:10; Dan. 10:6; Rev. 1:14; 2:18; 19:12. Moreover, the book of Revelation uses a similar symbolism where Jesus is symbolically described as a lamb having seven eyes, "which are the seven spirits of God", which are also the seven(fold) lamps burning before God. Thus, the seven eyes are also the seven lamps of the Spirit of God!)

Rev 5:6 And I beheld, and, lo, in the midst of the throne and of the four beasts, and in the midst of the elders, stood a Lamb as it had been slain, having seven horns and seven eyes, which are the seven Spirits of God sent forth into all the earth.

Rev 4:5 And out of the throne proceeded lightnings and thunderings and voices: and there were seven lamps of fire burning before the throne, which are the seven Spirits of God. 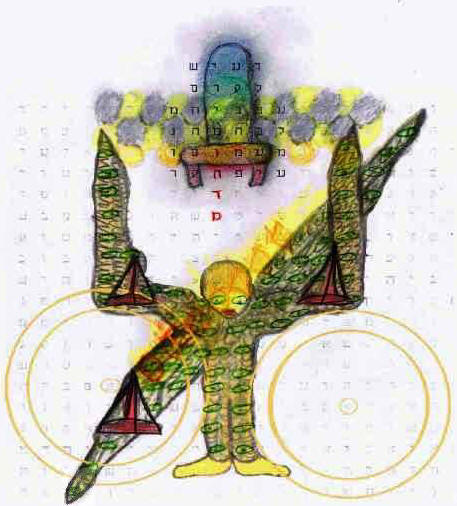 The Feet of the Lamp

The Head of the Lamp

The head is bowed down because the cherub is bearing a heavy burden, and as a symbol of Christ, his body, as it were, hangs down upon a tree/cross, (which is also the lamp). Jesus called himself, "the light of the world", and when Jesus "gave up his spirit" on the cross, it was as if the flame of the menorah went out, the sky already strangely darkened, (Matt. 27:45-50).

John 19:30 "When Jesus therefore had received the vinegar, he said, It is finished: and he bowed his head, and gave up his spirit."

Jesus is bearing the sins for the whole world, along with the weight of heaven and earth upon his shoulders, but particularly "the house of Israel". This interpretation agrees with what the bible code says and what the surface text reads. The actual surface text that forms the area of the balances reads:

Isa. 46:3-4 "Hearken unto me, O house of Jacob, and all the remnant of the house of Israel, that have been borne by me from their birth, that have been carried from the womb; and even to old age I am he, and even to hoar hairs will I carry you; I have made, and I will bear; yea, I will carry, and will deliver."

Where the Code is Found

The entire image (including the throne and the lower part of the river that runs from the throne), is embedded in the last two verses of Isaiah 45 through to Isa. 46:6. As we shall see, the image of Baal and his worshippers (embedded in Isa. 46:1-2), along with the entire image, agree line by line with the verses of the bible in which it is embedded. Moreover, this is true phrase by phrase and even word by word. The image interprets the actual surface text as you look at the image from top to bottom!

This is what the actual surface text (in bold) reads where the entire image is embedded. I have included one extra verse before and after for context. Please read it carefully, for it interprets the essence of what the bible-code images mean.

Isa. 45:23 By myself have I sworn, the word is gone forth from my mouth in righteousness, and shall not return, that unto me every knee shall bow, every tongue shall swear.

Isa 45:24 Only in Jehovah, it is said of me, is righteousness and strength; even to him shall men come; and all they that were incensed against him shall be put to shame.

Isa 45:25 In Jehovah shall all the seed of Israel be justified, and shall glory.

Isa 46:1 Bel boweth down, Nebo stoopeth; their idols are upon the beasts, and upon the cattle: the things that ye carried about are made a load, a burden to the weary beast.

Isa 46:2 They stoop, they bow down together; they could not deliver the burden, but themselves are gone into captivity.

Isa 46:4 and even to old age I am he, and even to hoar hairs will I carry you; I have made, and I will bear; yea, I will carry, and will deliver.

Isa 46:6 Such as lavish gold out of the bag, and weigh silver in the balance, they hire a goldsmith, and he maketh it a god; they fall down, yea, they worship.

Isa 46:7 They bear it upon the shoulder, they carry it, and set it in its place, and it standeth, from its place shall it not remove: yea, one may cry unto it, yet can it not answer, nor save him out of his trouble. 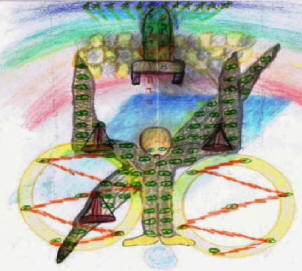 The Image of Baal

The false god Baal is also in the below image, along with a river running diagonally across the entire image. In the below image, Baal is attempting to ascend to God's throne "above the stars of God", etc. Interestingly, the bible tells us that Satan (Baal) once was a cherub who stood before God's throne, that is, before Lucifer (Satan) fell, (Isa. 14). Baal is being weighed in the balances and judged! (We will examine the Baal Bible Code in detail shortly.)

Notice that one-third of the stars are overlapped by either Baal's crown or his upper wings. This overlap suggests a "blotting out" or "casting down" of these four stars by Baal as similarly described in Rev. 12.

Remarkably, the worshipers of the idol of Baal in the code read: "Together they all bow down to the god of darkness!" This is a striking mockery of Baal, the sun-god, who claimed to be the god of light! In fact, the entire image of Baal is made up of a series of mockeries. This is remains true even when the letters that form Baal are converted to Atbash! 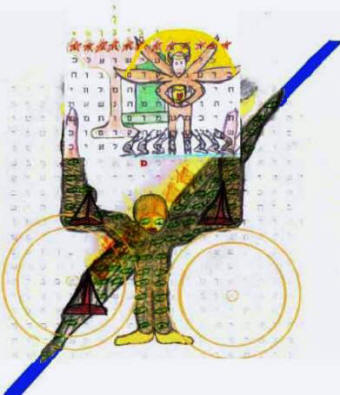 Isaiah 14:12-15 "How art thou fallen from heaven, O day-star, son of the morning! how art thou cut down to the ground, that didst lay low the nations! And thou saidst in thy heart, I will ascend into heaven, I will exalt my throne above the stars of God; and I will sit upon the mount of congregation, in the uttermost parts of the north; I will ascend above the heights of the clouds; I will make myself like the Most High. Yet thou shalt be brought down to Sheol, to the uttermost parts of the pit." 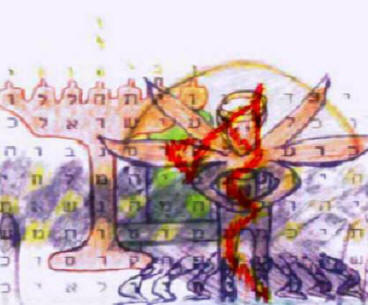 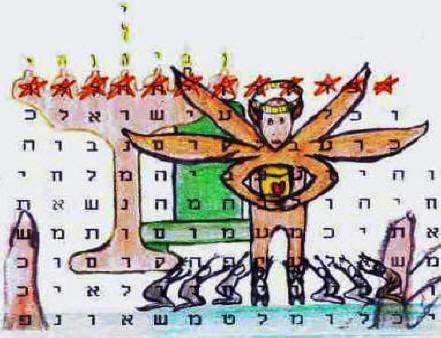 The Balance of the Cherub 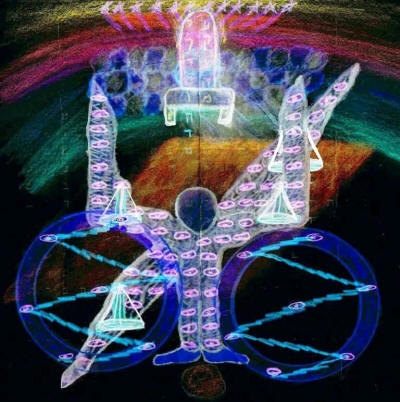 The two pairs of balances in the Cherub's hands are of most importance. Note that the bible says that under each wing there was a hand.

Ezekiel 1:8 In addition to their four faces and four wings, they each had four human hands, one under each wing. (GNB) (Interestingly, the living creatures {cherubs} on earth had four wings, but those in heaven had six, as does Baal, Rev. 4:8.)

In the image, the cherub has four hands with a balance handle in each hand.

The diagonal wings with its balance represents an unbalanced scale, that is, something "weighed in the balances and found wanting". (See the Mene Tekel Bible Code.) But the level balance depicts a righteous balance. The bible code applies various meanings to these two balances, that is, the equal and the unequal scales.

Next: What Each Part of the Image Reads , Including Baal

(Or, All in One Long Document)

How Picture Bible Codes overlap into one composite image!


What are Bible Codes?  Proved authentic