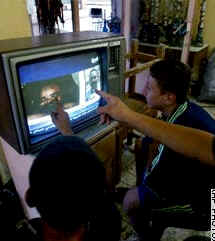 Saddam's two sons as the mirrored opposites
of "the two witnesses" of Revelation 11. (See below.)

Saddam hangs on day predicted by Bible Code
(Massive bible code put on net nearly 7 years ago,
detailing both how and when)

"The bodies of these two were gazed at by the whole world for 3½-days (Revelation 11:9). As far as I know, this has never happened before since the creation of man!"

The following is quoted from CNN.

"BAGHDAD, Iraq -- Graphic videotape images of two bullet-riddled bodies the U.S. military says are the sons of Saddam Hussein have been beamed around the world in an effort to dispel doubts that the brothers are dead.

The U.S. military took the unusual step of allowing reporters to view and videotape the bodies Friday at close range and in extensive detail after acknowledging that still photos released Thursday may not have been enough proof for many Iraqis."

The said "Friday" that they put the images out was thus 3½-days after their deaths, which was on or about about noon, Tuesday, July 22, 2003. Hence, the world gazed at their bodies for the same length of time that the world will gaze at the bodies of the (righteous) two witnesses of the book of Revelation. (Please note: whether the two witnesses of the book of Revelation are to be understood as two literal individuals remains to be seen. Perhaps they are just symbolic representations of any two things that testify about Jesus.)

There are a number of similarities between the two witnesses of Revelation 11, and the two sons of Saddam, (as opposites, that is):

Parallels Between the Two Witnesses of Revelation 11,
and the Twin Towers that Fell