Notes for Each Name

To view on this site: "Main Page of Bible-Names Code"

No notes, "Printable and Mobile Version"

King Amaziah (#39c) is the center of a complex bracketing-out of thought that moves foreword and backward from this center, typical of Hebrew poetry. The names have been color-coded accordingly. The names generally follows this pattern:

Luke has 77 names ---the number of forgiveness --- from Jesus to Adam "the son of God". The names after David differ from that of Matthew's genealogy due to another method of tracing the lineage of Jesus. Interestingly, these names recorded by Luke (from "David" on) do not form a names-bible-code as does Matthew's list, but when attempted reads as gibberish. This only underscores the miracle of Matthew's list of names.

And if we say that the numerous Old Testament writers somehow over a period of hundreds of years conspired to create the Names Code, then we are still left with a prophecy about Jesus the Messiah written hundreds of years before he was born. How much more logical to simply accept this code as a miracle of God!

The Names Code is based upon Mathew's distinct genealogy, most of which are also found in the Old Testament. Matthew lists 60 names from Adam to Jesus when we complete it back to Adam, and 65, if the extra five names are added that Matthew excluded. Some individuals had more than one name and these are also included in the code. Therefore, there are 65 separate individuals in Jesus ancestry, but 72 different names because some individuals went by more than one name, and the code utilizes all names. (For example, Jacob was also named Israel.)

However, the Names Code uses 80 names in all because the genealogy is bracketed by two others. It includes "God" at the beginning of the genealogy, (Adam is called, "The son of God", Luke 3:38), and it includes the "Church" at the end. And there are six extra names that branch off into Moses' line that we optionally include, but the code reads fine without it. (See notes for why the inclusion.) Thus, 72, plus two, plus six, equals 80 names in all. But there is still only 65 actual people in Jesus' genealogy. (Click here for the meaning of all these numbers.)

King David is at the exact middle of the genealogy, which is interesting because the bible calls Jesus, "The Son of David" nine times and "The Son of Adam (man)" בן־אדם 88 times. Jesus is linked to King David and Adam more than any other in his ancestry.

We have numbered the following according to Matthew's reckoning, except we include the five missing names, here listed are #39a, 39b, 39c, 46a, 48a. The omitted people in Matthew's genealogy are nevertheless recorded for us in the Old Testament. Thus, the following represents the complete list of names found in the bible, from Adam to Jesus.

The following is the composite list of the meaning of the 8 (10) names in the genealogy from Adam to Jabal along Cain's line.

Rev. 1:7 "Behold, he cometh with the clouds; and every eye shall see him, and they that pierced him; and all the tribes of the earth shall mourn over him. Even so, Amen."

Thus, the above reads: (Keep in mind that Cain was sent away as a "fugitive" upon the earth, Gen. 4:14, and that all men today are like Cain, fugitives fleeing God.)

Or the names can read slightly different...

1.   Sometimes a word in Hebrew has a double meaning that is lost in the English. On a few occasions both meanings are used to bring out the full sense. This is especially true if the bible itself applies the meaning of a name in more than one way, therefore the same liberty has been taken in the code, (example, Perez). Our purpose is to decipher the names-code. It is not to burden it with a modern methodology that is foreign to both the bible and to ancient near-eastern culture. To do so would be a huge mistake. Our interpretation must remain within the boundary that the bible itself gives to names. There are a great many names where the bible itself explains their meanings and applications. One cannot properly unravel the names code without first studying them, for they are the key that unlocks this code. Adam, Cain, Seth, Noah, Abraham, Isaac, Jacob (and all 12 sons), Perez, Peleg and Jesus all have the meaning of their name explicitly given in the bible. And there are a number of women also.

2.   On a few occasions, (as with Uzziah/Azariah and Eliakim/Jehoiakim), the person had two or more (often similar) names. Their meanings have been rendered as a compilation of both.

3.   Sometimes in the bible, one name has two meanings: the literal meaning and a meaning based upon another word that only sounds like the literal word. In other words, a pun. An example of this is the naming of Zebulun in Gen. 30:19-20. Also see the long list of puns on names in Jeremiah 48:1-9 and elsewhere, There likewise appears to be a few (not many) instances of this in the names-code, as with Kenan, Methuselah, Lamech, Arphaxad (both literal and as a pun), and perhaps Boaz. Also see note for Abraham.

4.   On several occasions, a noun has been used as a verb, such as Serug, (meaning, "a branch"). Since it is in parallel with the verb before it, "to sprout", the meaning of Serug likely carries this same sense also. Moreover, there is also a reference in the bible to the branch of the Lord "branching forth", (Isa.11:1; Zech. 3:8; 6:12).

5.   "And", "but", "of", "the", "is/are", "in", "to" etc., are included in the meaning as simple connector words, necessary in a code of this type, and not uncommon in normal Hebrew too. Other additions are used only when the meaning is strongly implied. These are bracketed. The code could read without these inserted words in the brackets but that would hinder the casual reader. It would especially hinder one unfamiliar with the biblical narratives because the names-code is running through the biblical history of man and interpreting it as it goes. Recognizing this is key to interpreting the code in segments, or as a whole. The names-code summarizes the history of man as seen through the eyes of a Jew!

6.   Sometimes the names appear out of order to the English reader, but not in the Hebrew since the adjective usually follows the noun in Hebrew, and there are other such differences between Hebrew and English. (See#57 and note for an example.)

7.   The context determines tense because tense can be blurred in Hebrew when dealing with prophecy, with the exception of Jeconiah. He had three names basically the same, two of which were exactly the same except for one being future and the other being past tense. Therefore, since the names themselves make this distinction, it is thus reflected in the code.

8.   Wherever the code reads, "the Lord", it actually reads, "Jehovah" (or "Jah" as shortened), or as more correctly pronounced, "Yahweh". Jehovah is the personal name of God given to Israel by covenant at the time of the Exodus.

Over a dozen sources were used to dig into the meaning of these names, many of which are found in the E-Sword free software. The classic and monumental works of “Brown Drivers and Briggs Hebrew and English Lexicon” and “The International Standard Bible Encyclopedia” were the main resources, also free over the internet, and therefore others can verify the names for themselves.

We include the "Church" as Jesus "offspring" as the 66th "person" only in a spiritual sense, (Isa. 53:10). Interestingly, there are also 66 books of the bible. Perhaps of prophetic importance is the following:

Gen 46:26 "All the persons who came with Jacob into Egypt, the offspring of his body, were sixty-six, without taking into account the wives of Jacob's sons."

2. The Meaning of Arphaxad

The following is quoted from "The Jewish Encyclopedia":

"The identification of Arphaxad has been the subject of many wild guesses. The identification with Arrapachitis in the mountainous district of the Upper Zab is now generally abandoned; and there is general agreement that the last element of the name,

, which in Arabic and Ethiopic means "boundary," "limit," the whole word meaning "district of the Chaldeans." Hommel ("Ancient Hebrew Tradition," p. 292), who is followed by W. Max Müller (comp. ), explains the name as a corruption of "Ur-kasdim"; but this view leaves the presence of the פ unexplained. The Egyptian article (Hommel) is out of place here. Cheyne (in Stade's "Zeitschrift," xvii. 190) explains the word as being composed of

, name of the Assyrian province of Arbaha, and

. Whatever the origin of the name, it no doubt refers to the Babylonians."

"More recently, the view of Michaelis, anticipated by Josephus ("Ant." i. 6, § 4), that Arpakshad contains the name of the Kasdim or Chaldeans, has become predominant. The explanations of Gesenius, etc., "boundary ["Arp"] of Chaldea" (Keshad); of Cheyne, "Arpakh" and "keshad," written together by mistake ("Expositor," 1897, p. 145), etc., are now superseded by the observation of Hommel ("Ancient Hebrew Traditions," 294) that Arpakshad is the same as "Ur of the Chaldeans" (Ur-kasdim). Both names agree in the consonants except one, and also in meaning, as Arpakshad is the father of Shelah, grandfather of Eber and ancestor of Terah, Nahor, and Abraham, who came from Ur (Gen. xi. 12). The inserted "p" of Arpakshad has so far not been explained—Hommel has recourse even to Egyptian—but it is doubtless due to some graphic error. In Judith i. 1, etc., Arphaxad, a king of the Medians in Ecbatana, is mentioned, conquered by Nebuchadnezzar II. of Assyria and put to death. The name has clearly been borrowed from Gen. x. by the writer.

For further notes about the Names Bible Code, click here! 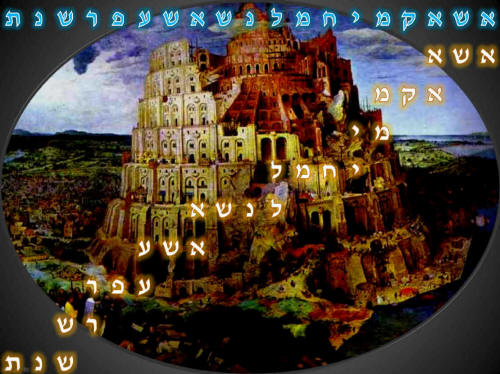 Copyright © 1997-2017
If reproduced, please provide hyperlink back to this page.