Comet Machholz is now the fifth naked eye comet in 2004. Twice before, in 1911 and again in 1970, four comets managed to reach naked-eye brightness within a single calendar year. But this year we have five!

Below is the comet that will reach its peak on Jan. 7, 2005. (This is Christmas according to the Russian Orthodox Church.) (Also see the greatest solar flare ever recorded, which occurred 430 days prior, [Ezek. 4].) The comet is the brightest in about seven years, and one of five naked-eye comets to appear in 2004. (No other year between 1900 and 2000 has seen so many comets in one year.) However, its location at its brightest point is what makes it highly symbolic. This is because the comet attains its peak brightness as it approaches the "Pleiades" star cluster in its nightly north-bound progression and ascension, (Eph. 4:8-10). ("Pleiades" is mentioned three times in the Bible, [Job 9:9; 38:31; Amos 5:8], and has rich symbolic meaning as we shall see.)

The comet begins at the lowest spot in the heavens, the river of judgment (Eridanus), and ascends to the highest heavens---towards the North Star.

(Eph. 4:8-10) "Wherefore he saith, When he ascended on high, he led captivity captive, And gave gifts unto men. (Now this, He ascended, what is it but that he also descended into the lower parts of the earth? He that descended is the same also that ascended far above all the heavens, that he might fill all things.)"

Believers in Jesus the Messiah are the "captives" that will ascend with Him!

Two days after the above mentioned "greatest solar flare on record," I had a dream. In the dream I saw that the enemies of Christ had formed about seven stars that in turn formed a throne. Then the Lord beckoned the overcomer to sit down on it even as He had sat down. That morning I saw the front page of our newspapers which showed our prime minister being awarded the throne-chair for having served the country 8 years. (But did he serve God?) He held it above his head into the heavens, just as in the dream.

Then I knew of certainty that it had been a dream from God. I also understood at that time that the stars represented the Pleiades star cluster. I was reminded of Joseph's dream about the 11 stars (i.e., his brothers) bowing down to him, (Genesis 37:9). Read the very last words given to the seven churches. (The churches are called "The Seven Lampstands." According to Jewish tradition, Pleiades is also said to depict the seven-branched lampstand .)

(Rev. 3:21-22) "He that overcometh, I will give to him to sit down with me in my throne, as I also overcame, and sat down with my Father in his throne. He that hath an ear, let him hear what the Spirit saith to the churches."

More on the Comet

Pleiades (Job 9:9; 38:31; Amos 5:8), a cluster of seven stars, denotes the seven-branched menorah in Jewish tradition. (It is also known as, "The Seven Sisters.") In the Balance Bible Code, this image (put out half a year ago) depicts a scepter (like a club) running along the River of Judgment ("Eridanus," which is where the comet originated) and also through the Menorah of Judgment ("Pleiades"). (See image below.)

Num 24:15 And he took up his parable, and said, Balaam the son of Beor saith, And the man whose eye was closed saith;

Num 24:16 He saith, who heareth the words of God, And knoweth the knowledge of the Most High, Who seeth the vision of the Almighty, Falling down, and having his eyes open:

Num 24:17 I see him, but not now; I behold him, but not nigh: There shall come forth a star out of Jacob, And a sceptre shall rise out of Israel, And shall smite through the corners of Moab, And break down all the sons of tumult.

Also see (below) Jacob's Acrostic-Bible-Code prophecy
put on the Net in November of 2004.

The next comet after the one during the tsunami was Comet Pojmanski. (It was seen in late February of 2006 with the naked eye, and was closest to the sun on March 5, 2006.) Comet Pojmanski was about 430 days after the time of the Tsunami and as far as I know there were no naked-eye comets in between that time. That comet peaked on Jan. 7, 2005. This means that those two comets very roughly span the 430 days between the symbolic dates of 1876 and 1446 BC as discussed earlier, and both were visible to the naked eye on those symbolic day-year dates.

Also see:  The Timing of Arafat's Death (Discuses the above in greater numeric detail.)

Note: While astrology is forbidden in the bible (Isaiah 47:13), nevertheless we are told to watch the heavens for signs that herald Christ's return, (Luke 21:24-28).

See also Yasser Arafat: "The Father of Modern Terrorism" and 9/11

Iran Earthquake of Feb. 22, 2005
and President Bush's visit to Europe
A sign of the coming war of Russia and Iran with Israel 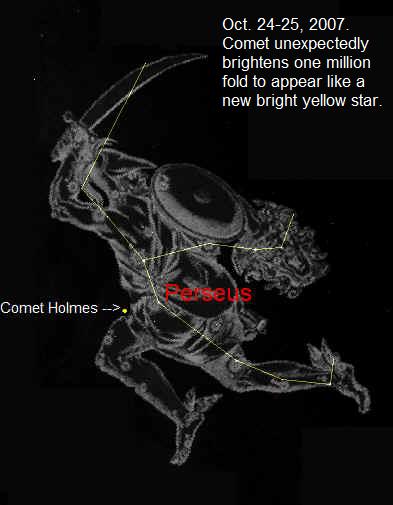