(A continuation in the series about the Balance Bible Code.)

(Also see, Summary of Hurricanes of notoriety and timeline)

This is the 12th hurricane that I believe God
has applied this particular code to.
Please see the many other articles written
about the Balance/Hurricane Bible Codes.)

We will not take the time to repeat the full code here.

I speculated a while back that "Alpha" might form during the Feast of Tabernacles as a sign of the coming of Christ who is also called, "The Alpha and Omega" in the book of Revelation. (Tabernacles is associated prophetically with the second coming of Christ.)

I discovered the below acrostic about 2 hours after "Alpha" became a named storm (at 5 pm, Oct. 22, 2005). This is the first time that the regular names for hurricanes have been used up when naming them, which then requires the use of the Greek alphabet to be used as names instead. Jesus is called the "Alpha and Omega!" The equivalent to this in Hebrew is "Aleph and Tav."

From the day that I first discovered the Balance Bible Code I noticed that the first letter of each word moving up the river in the code 'almost' formed an acrostic. (What the 'river' says forms the central message of the code, with the central part of the river being especially emphasized. That central phrase reads, "I am Jesus!" It is encoded in Isaiah 46:1-6. The full river-code reads: "Be still! Be quiet before me! I am Jesus! Be still and you will shine (as a river.)" The language used in the code brings to mind the 'stilling of the storm' by Jesus, and thus the code's connection to the hurricanes. Jesus said, "Be still!" etc. And the bewildered disciples asked, "Who is this that even the winds and the waves obey Him!" The answer to their question is in the code, "I am Jesus!")

But an 'almost-acrostic' is not an acrostic! And so I left it, only to come back over the past year to ponder it again and again, yet without success --- until now!

Many other bible codes contain acrostics as well, whereby the first letter of each consecutive encoded Hebrew word in the encoded sentence contains another encoded word or phrase that amplifies and agrees with the parent code in which it is taken. The mene-tekel code is an example. (See right image.)

Sometimes even the acrostic contains a sub-acrostic made up out of the acrostic! The lengthy Lion-of-Judah-Bible-Code is the supreme example of this, and it is also related to the Balance Bible Code.

Moreover, the acrostic phrase formed from the river-code also contains a sub-acrostic --- perfectly agreeable to the rest of the Balance Bible Code, and this sub-acrostic contains a play on words. As we shall see, it reads, "Lift up!" or, "Forgive!" It is in the feminine gender, meaning that this is the cry of a female. The Balance Bible Code elsewhere uses this same double meaning, asking God to 'forgive' by balancing (i.e., 'lifting up the tilted arm of the balance') and thus make things equal or just. (Note the tilted Balance along the river within the tree in the main image at top.) To tilt the balance back up is to make it equal again, that is, to make it right of just. Thus, it is to forgive by making right/just again. This is done by the atonement of Messiah Jesus (Yeshua) on the cross.

To continue ... The acrostic that is formed by using the first letter of each word of the river-code reads:

"The destruction of (hurricane) Alpha (is) from Jesus!"

(The Hebrew reads the same way as the phrase,
"The destruction of the daughter of my people," in Isa. 22:4.)

As said, there is a final sub-acrostic to this acrostic (to this code!), which reads: "Lift up!" or, "Forgive!" This tiny phrase balances (literally!) the message by implying that both destruction and mercy come from Jesus!

He is Lord of both justice and mercy!

(Codes acrostic) "The destruction of (hurricane) Alpha (is) from Jesus!"

I inserted the word "hurricane" in the reading of the acrostic because of the timing of when I found it. Moreover, the Dragon Bible Code also uses the letters Aleph and Tav as proper names for Christ. (This is examined more closely at the end of this article.)

Moreover, the timing of tropical storm Alpha speaks in another way. Yes, numbers speak! Just yesterday I wrote an article about the number of days from the Balance Bible Code until now (hurricane Wilma). And how Sunday, the first day of the week, (which begins after sunset Oct. 22,) is 483 and 490 days from the Balance Bible Code. (I explain the numeric here on the forum, --- "Wilma divides the 7-days of tabernacles into 3.5 + 3.5 = 7 days. See "70 weeks" from Balance Bible Code.") These numbers (70 x 7) symbolize forgiveness after destruction (as based upon Dan. 9:24-27), and these are the key words in this bible code acrostic! "The destruction of (hurricane) Alpha (is) from Jesus!" "Forgive!"

Currently as I write, newly formed tropical storm Alpha is heading toward the same place that tropical storm Jeannie hit last year. (Jeannie is one of the 12 hurricanes that God has been speaking to me about.) Tropical storm Alpha is supposed to strike tomorrow (Sunday) with torrential rains and with possible mudslides. (Last year Jeannie killed one to two thousand by mudslides.) At the time I wrote the article about Jeannie last year, I noticed another bible code coming forth from the letter Alpha of the acrostic just discovered! It, too, is about mercy after judgment!

It may be that Alpha will come back another year to fulfill its destiny. I don't know!

The following is from that article about Jeannie. (Note that the bible code can begin from the first green square or the red one. The 'aleph' is over lapped by the first two squares. See the actual Jeannie Bible Code for details.)

This is the short version along the axe only, and spiraling into the center. (See the actual Jeannie Bible Code for details.)

(Encoded within Isaiah,
where the surface text reads much the same thing!!!)

The Use of Letter Alpha
in the Dragon Bible Code

Compare this acrostic from the Balance Bible Code about "Alpha" to the Dragon Bible Code that also speaks about Jesus as the "Alpha and Omega." A section of that bible code in part read (part 3): 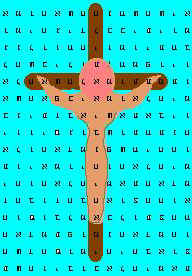 "When we take all the possible sentences that can read along the horizontal beam and put them together, this is what the beam says:

"Did not the Man certainly die (and his fiery suffering)? O Thomas, He and it will certainly die, having been made a curse, a desolation, though He was innocent. Behold, from before the fall a flawless Lamb died! (see Revelation 13:8) A Lamb, circumcised for His mother! (That is, Eve, the mother of humanity.) You are made whole! He is the mighty tree. He is God, the God of Truth! Omega and Alpha! Behold the letter Alpha!---The Alpha and Omega! (The Alpha-bull hanging on the Omega-cross!) And He makes for them a complete and perfect peace! Is He their garment (that covers their nakedness)?"

The above is confirmed by what the head reads, for it reads much the same. This is probably the most complex single circular code ever found. It reads:

"Did he not certainly die? From Alpha to Omega (and from Omega to Alpha) on account of their curse a Mighty One (or, 'God'), O Thomas, is being hung to die for the sake of the Truth. Did He not die for the nations? Did He not die for a mother upon a mound of ruins?" ("Mother," here, represents the nation Israel from which Messiah was born. See Revelation 12.)"

IMPORTANT ARTICLE IN THIS SERIES:
"How the Gods of Babylon
are Weighed in the Balances."

Also see,
What does Hurricane Wilma
have to do with the trial of
Saddam Hussein?
(Update on the Mene Tekel Bible Code)
(Posted on forum)

For more on the last seven storms of 2005
and the probabilities of the bible code predicting them click here.